When drivers have a crash and are suspended they lose the ability to really use it to learn from. Right when they should be learning they are forced out of the sport for a time period, the opposite of what should happen. Racers360 is recommending series to have drivers send in their videos to professional coaches so the coach can analyze what happened, explain how to avoid the mistake, and coach them to move past it.

Let's Educate Drivers After Incidents Not Punish Them

We have all driven with or known of a series that suspends drivers after an incident on the race track. That has been the norm for many years, but it is time for us all to look at this policy and see if there may be a better way to handle this unfortunate side of our sport. At Racers360, we have been brainstorming with experts from all domains within our sport on this issue and this year we have been rolling out a test of a brand new educational way to deal with incidents.

We have already executed on a few incident reviews for the Crossflow Cup in the CSRG series. We’ll go into our initial findings, why we believe in our direction, and how we can introduce this incident analysis at your organization.

Why Suspensions Or Bans Are NOT The Answer

Our pro coaches have studied a vast array of incidents within amateur racing and nearly all can be split up into two categories:

I think we all know red mist style mistakes when we see one. They are outrageous and have no place in a sport like ours. Suspensions or bans work well for these incidents, but the line between mistakes that stem from a lack of situation awareness or basic techniques and red mist ones can become quite blurry to an untrained eye. Far too many drivers are suspended and forced away from the race track for prolonged periods of time, which does not help a driver learn from the one thing they could learn the most from.

Let’s take a look at one quick example where racecraft can be counterintuitive: 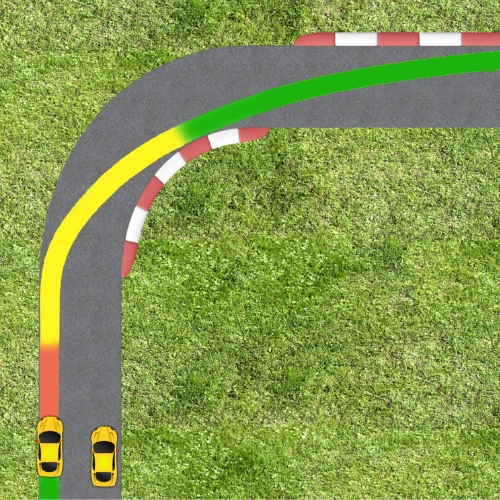 What is wrong with this image?

One of the most frequent mistakes we see from overtaking cars in amateur racing is that they try to give the car they are overtaking as much room as possible. This act of trying to reduce risk actually puts a driver in a much higher risk position.

When the driver moves far away from the car they are trying to overtake it makes them much more difficult for the driver in front to see. Drivers end up in blind sports far more often which leads into drivers being turned in on at a far much higher rate.

The second negative of that large gap is it not only leads to a driver being turned in on more frequently but when it happens it leads to a more significant impact as well.

When the overtaking driver stays close to the car they are overtaking there is a much higher chance they will be seen and if for whatever reason they are not the contact will likely be just a very light glance vs. a T-bone style incident.

It is a subtle difference but this is what it should look like: 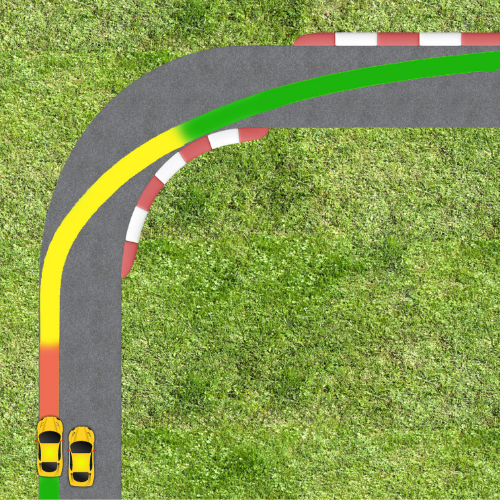 Lack of situation awareness mistakes is a much broader category and far more common. We often see incidents that have a root cause of a lack of situational awareness from a driver miscategorized as red mist ones. That means often the punishment of a suspension does nothing to solve the root problem. That is why it is so important to ensure the quality of those reviewing incidents is of the highest standards.

How Does The Racers360 Incident Analysis Work?

Everything we do at Racers360 has been made to be as easy and effective as possible. So, here is how we are implementing our incident coaching for the Crossflow cup:

All on-track incidents are first reviewed by the race stewards. As long as the incident isn’t an obvious egregious one that deserves an immediate ban, the drivers are given a choice by the series:

The obvious point here is that for this to work we do need a video of the incident. Most drivers on track are filming their driving with some type of device so this is not typically an issue, however, we do believe that for all race series video should become a mandated item.

It has been that way in pro racing now for quite a while and is such an important tool for analyzing, learning, and even marketing that the limited cost of a go-pro (or even just filming from a smartphone) is far outweighed by the positives that video creates for all drivers and organizers alike.

Does It Actually Help?

Without a doubt, YES. To help show how we will dive into an incident analysis we recently did - for privacy reasons we will leave out driver names.

The Incident - It was a single car crash at turn 10 at Sonoma on lap 4 of the race.

This was not the drivers first incident as of late and the series immediately mandated a Racers360 incident analysis coaching session. As apart of our incident analysis we review the entire race or session for a driver as well as the incident. So our coaches go beyond the crash and coach on everything we see. Becuase of that we actually caught onto a few bad racing habits that our driver had as well, and hit square onto one of the biggest issues in our sport. We will dive into what we found and our follow up conversations with the driver now below.

The situation that led to the crash is an extremely common one. The driver was running mid-pack and saw the leaders slowly creeping away each lap. That led the driver to want to try and push the limits and unfortunately, they chose the wrong spot and the wrong way to test the limit.

When our coaches diagnosed the crash they saw at corner entry in 4th gear the driver had an increase of nearly 1000 rpm at the exact same spot compared to the lap before. (it was filmed on a GoPro so that is the best data point we could use) That is a huge amount! The driver had a slightly early turn in point, totally normal for a driver to do when making a big jump in speed, but it was really that additional entry speed that led up to the crash.

A lack of a good education or coaching source hurt our driver in two ways here. First, if the driver had someone credible helping them, that coach would have identified that turn 10 is the last place they should be looking to find time in. They would have had their goals of finding time with correct technique in the low-risk areas first and when our driver saw the leaders creeping away they would have focused on those areas, but not on turn 10.

The second way our driver was hurt by not having a credible coaching source is seeking what we call “paddock talk.” Anyone with experience in racing has heard that driver saying; “oh yeah that corner is totally flat out” or “I am braking at the 1 marker.” In our follow up conversation with our driver they mentioned they had been told that turn 10 could be done flat out in their type of car. That was just entirely wrong. It is unfortunate how many incidents we see from drivers listening to the wrong source of information. Even if it could be done flat out, it does not mean our driver would have had the technique down to be able to complete it flat out.

That is what makes coaching in a personalized way so vital. Not to mention that drivers often overemphasize how much time they are losing in fast corners vs. the slower to medium speed corners.

Because our coach went through and reviewed the driver's full race they also picked up on a few other items. First of all our coach was able to give our driver an actionable plan for improvement areas and gave specific ways they can find time in a safe way.

Our coach also noticed a racecraft issue that could have easily lead to further incidents. When looking at the braking zones when there was a car behind we noticed our driver started crabbing (slowly moving towards the inside of the corner before the turn in point).

Our coach reached out and had a conversation with the driver and was able to figure out that our driver in the braking zone was slowly moving to the inside as a “defending” move. This became immediately almost as big of a deal as the crash itself. We NEVER want to see drivers moving in a braking zone, that is where big crashes happen.

So, through our Racers360 incident analysis, our pro coach was able to help the driver understand what led to the crash, what they could have done differently, found another big race craft issue to fix, and gave the driver actionable coaching on where they can find time to drive faster but in a safer way. That is some powerful stuff!

There is absolutely no cost to a race series for this service. The way Racers360 is structuring this is as a cost to the driver in the incident. The charge to the driver is also very minimal, all of what we have described above will only cost $299. The impact we have already seen after one month of testing this has been immense, and our hope is through education we will see drastically lower incident rates, more green flag run time, and most importantly increase the amount of fun we all have on the race track.

When drivers can trust one another on the race track we have more fun, so if you think our incident analysis service makes sense for the series you race in, let your organizers know or send us an email anytime at Team@Racers360.com.

Have an idea that would improve this even further? We want to hear that too! Let’s all work together to improve our sport! You can learn more about our Race Analysis service here