Trail braking allows us to reduce the braking zone length and roll in more entry speed. Going from 100% throttle to 100% brake threshold quickly is vital, as soon as you tip in you will want to slowly start releasing that brake pressure. Mastering this on the race track takes time to develop the feel, but here Mike Edwards gives you everything you need to know to cut down that time!

Trail braking is one of the biggest topics I get asked about when coaching riders.

On a motorcycle, trail braking, corner entry and apex speed are three separate components; what trail braking does, once mastered, is it allows you to fit them together in a seamless fashion; giving a reduction in the time taken from the first application of the brakes for you to arrive at the apex. Ultimately reducing your lap time.

It’s an important technique to learn, as it allows you to ultimately brake later and deeper in to the corner, and this helps to carry your speed in towards the apex.

Braking is not just about slowing down, it is a precisely timed combination of individual actions which starts with transitioning from throttle to brakes. This involves weight transfer from the rear to the front smoothly so not to destabilize the bike.

Towards the end of the braking zone, there is then corner entry to be considered. The handover from brakes to corner entry needs to be smooth and progressive, as once again weight transfer is involved; this time from front to rear, balancing the bike out for the corner.

In the video here, I use turn 12 at Mugello, as a typical corner that can help you visualise what’s involved.

A flat approach but from the tip in point, the track drops away making it really important that you ease off on the brake as you tip in – that’s trail braking.

Also you’ll see in the video to help I’ve drawn a couple of charts to help explain the technique. One is an XY chart – ‘brake pressure over time’ and the other is an ‘angle of lean’ chart. 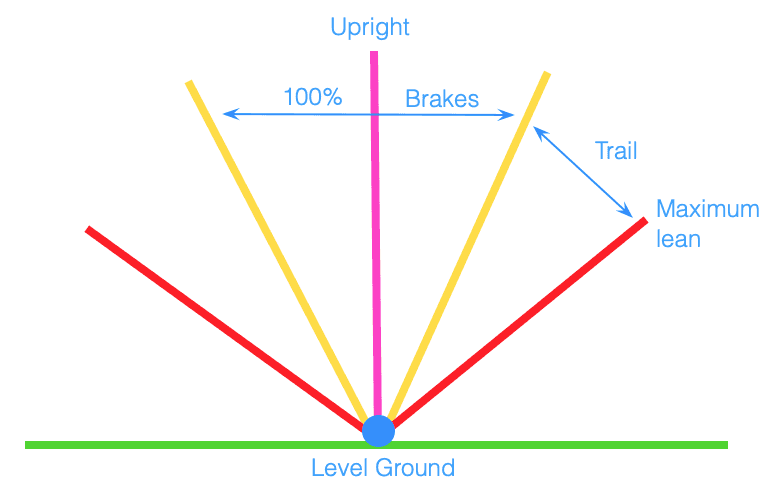 Starting off by discussing the racing line, it’s important to note that there are several points on track where actions need to happen in the correct order and at the correct time.

During the video, I’ve marked these points as red dots – so that, in effect you can follow a ‘dot to dot’ line in to, and around the corner.

As you reach the first of the points on a straight line approach, which is the initial braking reference point, here it’s 100% throttle to 100% brakes.

I find it best to use a percentage to describe application, because one rider’s hard braking may differ to another rider’s.

Next point detailed is the tip in reference. Now here is where I refer in the video to looking at the angle of lean chart. Generalising, if the bike is upright or close to it, you can use the maximum brake pressure, or 100% of yours.

I’ve detailed a green line that depicts the level ground on the ‘angle of lean chart’ and the pink line is the bike in the upright position. The yellow lines create a V shape, with the upright line in the middle, if the bike is within this V shape you can still brake using 100% brake pressure. The red lines I’ve detailed are the maximum possible angle of lean, usually around the mid part of the corner or apex.

So from the tip in point up to the third point or red dot, which is roughly half way across the track, normally towards the apex, you can still brake 100%.

But from the third dot to the fourth dot, where we finally release the brake, it is a progressive easing of the pressure. This allows the weight to transfer back to the rear, balancing the bike, as you close in on the apex last dot, point five, still on a closed throttle, giving the bike the best chance to turn in to the apex.

Back to the first dot, the braking point, the bike is close to upright, so it’s 100% braking, up to the second dot, which is the tip in point, still 100% braking as the bike is still relatively upright.

Closing in on the third dot we are still inside the V shape so it’s still possible to brake 100% but from this point to the fourth dot we are now outside the V so we must ease off the brakes to a point where you eventually have realised them completely.

How hard you squeeze the brake lever, where and when its easier to visualise using the pressure over time chart. Approaching the initial braking point we are at the start and the bottom of the chart. Quickly yet smoothly build to 100% brakes. As time and distance go by up to the tip in point it’s still 100% braking.

As you start to tip in into the corner, to the mid track point, being still in the V it’s 100%. But, from mid track heading towards the apex we need to ease off the brakes.

This shows a tapering of the pressure from maximum to minimum, much more progressively than the initial application. This technique allows the use of brakes ultimately later and deeper into corners, however it’s a confidence issue, something that you need to build up to.

This trail braking technique obviously has to be tailored to suit the varying type of corners you’re going to come across. Remember brakes are not a switch with an on/off action, they are a feel based thing that needs time, experienc

Want to know how YOU can improve your trail braking? You can learn directly from the best coaches in the world, just like Mike, simply by sending in your video to Racers360.

After you send in your video you will receive a personalized coaching video for under $100. You can find out more about our services and how you can start finding seconds clicking here.