Strategy From Within The Racecar - Webinar

Finding That Last Tenth During Qualifying

It's go-fast time in your race weekend. We put just enough fuel in the car for a few laps, we put those sticky tires on and we are going to go set the fastest lap of the entire weekend.

Everything is perfect, we roll out and send it. We hit what we think is the perfect lap, but when we see the lap time it is slower than we were going before. "Okay, now this is going to be my lap!", we think to ourselves. Again, we cross the line and even slower. What is going on? It is a situation most of us have been in before!

Typically, when this happens there is one root cause... over driving. We get some amped up to get faster that we forget smooth is fast. So, a simple way to try and help drivers fix this is by helping them focus on where the lap time should come from.

When we put those new tires on, we immediately have more grip everywhere. So, yes we should be able to brake slightly deeper, we should be able to roll in that additional entry speed, and get back to full throttle earlier. But, what our coaches have seen is that when a driver focuses too much on trying to brake deeper to find that lap time it is easier to end up over driving the car.

So, let's look at some data to show why in certain corners we want to focus on a lighter brake zone to roll in more entry speed.

In non-hairpin corners you will often be better off focusing on keeping your brake point but brake lighter. A great example of a corner where we want to brake lighter is turn 6 at Sonoma Raceway.

What we want you to focus on in this image is the top line of long g. Yes our driver went a little bit deeper, but you will see more importantly that red line didn't go as low as the green, meaning they were braking lighter. They focused on a lighter and longer trail brake and you can see the result was a ton more entry speed, while having the same minimum speed.

They didn't try to combine a ton more entry speed with jumping back to full throttle earlier. They were patient, brake lighter roll in that entry speed with a longer trail brake, wait for the car to rotate and the point to where you can start to unwind the steering wheel at corner exit and BAM! Jump on that throttle aggressively but only at that point. 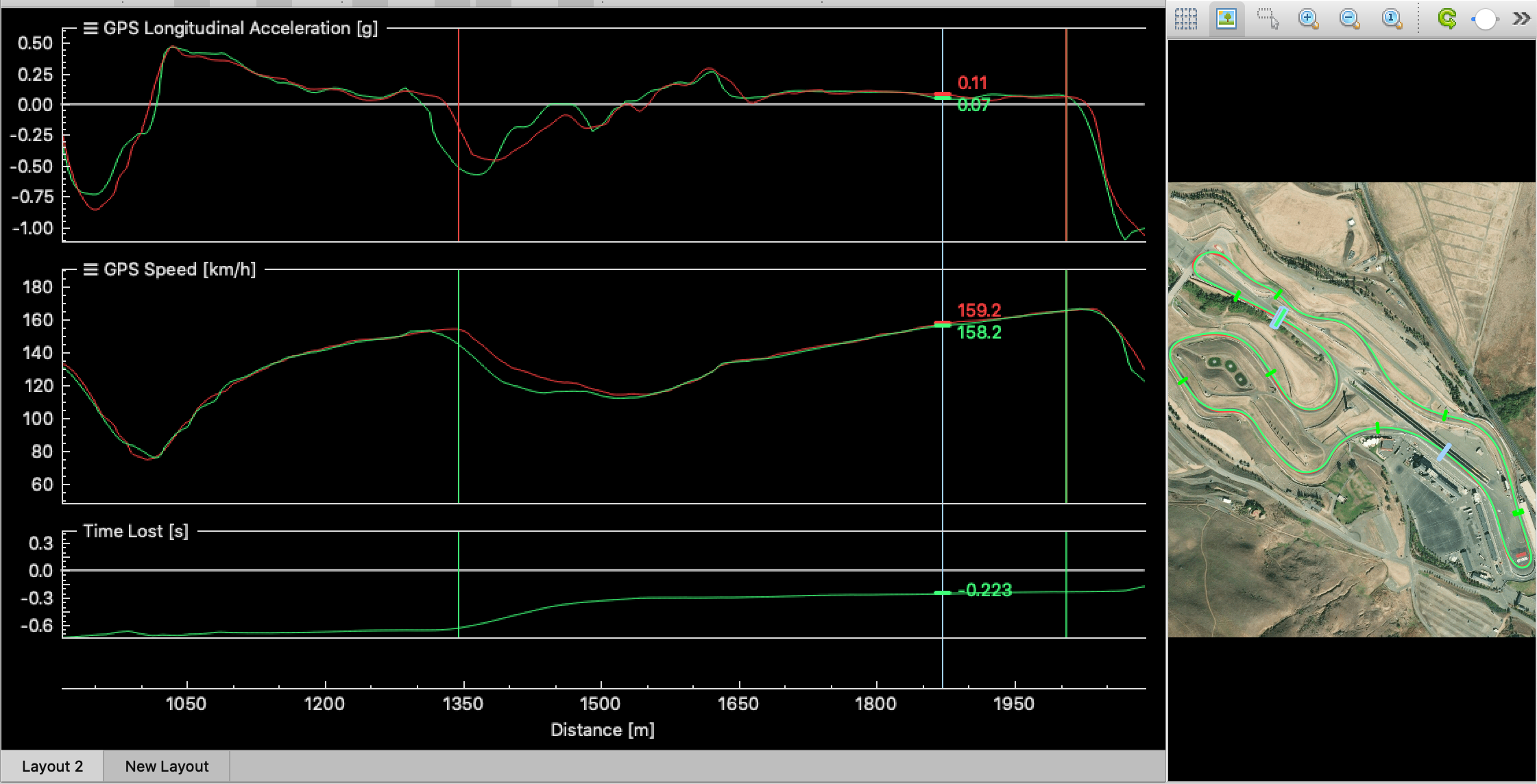 This is the perfect way to defend your position on the race track. Here are the main points we look for:

1) Proactive NOT reactive. Notice how the driver in the white car realized right away they had a bad exit and immediately moved to the inside, before the driver we are onboard with moves to the inside. What we never want to see is moving or defending after you are in the braking zone.

2) Get all the way to the inside. When possible (not all series allow this, know your rules) but make sure when you defend you don't still leave room to the inside. Really force that driver to try and overtake you the hard way.

Now the last thing we briefly want to talk about is what the overtaking driver could have done differently to improve. Once we arrived at the brake zone they pretty much knew that they wouldn't be able to overtake here. So, they should have focused on maximizing their line and drive out of turn 11. Instead, they just stayed to the inside here and followed the car in-front. We would have liked to have see them open back up to the left and focus on beating the white car out on the exit.

Here our driver is in a train of cars. He is trying to overtake but he is also worried about being overtaken. In these situations being smart is critical and picking your spots to overtake has to be carefully thoughout.

We know that our best chance to overtake comes in areas where there are big brake zones. Turn 10 at Sonoma Raceway is one of the most difficult places to overtake because there is no brake zone, it is just one line and the risk is very high.

Our driver had a monster run out of turn 8A but that run was so big it caught them by suprise and they ran into the back of the car in-front. Right then and there they should have know that passing in turn 10 was not going to happen and they should set it up for turn 11.

Instead, they looked a little bit to the inside and that compromised their line into turn 10, which hurt their exit. First mistake.

Second mistake was that they did not defend early enough. In the previous video, we saw the white car immediately dive to the inside. Here our driver should have realized their poor exit and dove directly to the inside. Instead, they did not and the result was it was an easy over take for the orange car (albeit they screwed that one up with way too late of a brake zone).

When Over Taking, Be Determined To Get To The Inside

Here our driver has another monster run out of turn 6 and it is leading into the best overtaking place at Sonoma, turn 7. But, that monster run did not result in a successful overtake. What should have been done differently?

If they were alongside the orange car but on the inside they would have controlled the corner and this would have been a very easy overtake. So, while nothing feels better than overtaking a car around the outside, don't make your life more difficult than it needs to be. Do whatever you can to get to the inside or at least make the car defend that inside line all the way!