To effectively rev match your downshifts there are two key areas: where in the braking zone does your downshift come and when are you blipping the throttle? The perfectly timed downshift does not come during threshold braking but actually in that middle part of the brake zone, in between peak brake pressure and turn in. We also want to make sure that blip comes only as we put the shifter into the gear we are downshifting into. Most drivers are actually blipping the throttle too early in the heel toe technique

What Is Rev Matching And How To Easily Master It

Before drivers are ready to work on rolling entry speed and trail braking into a corner there are a few foundations that must be perfected first. One of these foundations is timing the downshifts within the braking zone and perfecting rev matching. It does not matter if you are having to heel toe downshift or if you are driving a paddle shift car forming this foundation is important for drivers of all levels!

The first step of perfecting downshifts on the race track is identifying where in the brake zone they should come. Braking zones can be split into three zones:

We want to avoid our downshifts coming in zone 1 or 3. Contrary to common belief we typically don’t want to heel toe downshift when we are at our absolute highest threshold braking. At that point our speed is typically higher which will make the rev matching more difficult for drivers. We will get into perfecting the rev matching a little bit later in this article.

Here are some graphs using data to help visualize the 3 zones in a braking zone:

We also want to try and avoid downshifting after the turn in point at corner entry. There are a few reasons for this. The main issue is if we don’t get that perfect rev match and we lock the rears a little bit, the negative effect of that will be made exponentially worse when we are turning in.

During straight-line braking, if we don’t time the blip correctly and we don't get our rev matching perfect the rears will lock a little bit as we release the clutch. Typically this will just cause the rear to move around on us a little bit in straight line braking but won’t cause a spin unless it is very egregious. If we make that same mistake after turn in it will almost always cause a spin or a very big moment.

After the turn in we are also on very light brake pressure and our focus needs to be fully on feeling the car at the limit and manipulating the brake pressure to work with any understeer or oversteer we may have. That extra mental capacity needed to heel toe downshift in that region will distract most drivers too much and they will tend to make more small mistakes as they get closer to driving the car on the limit.

It does not matter if you are left foot braking or right foot braking where we want our downshifts to come in the braking zone remains the same.

Are you struggling with your heel toe braking technique? We have a step by step guide on the perfect technique here

When we time our downshift correctly and we time our blip correctly rev matching should be very easy. It should never require more than about 10% to 20% throttle on the blip. If you feel like you need more than that than you have mistimed that downshift or blip. 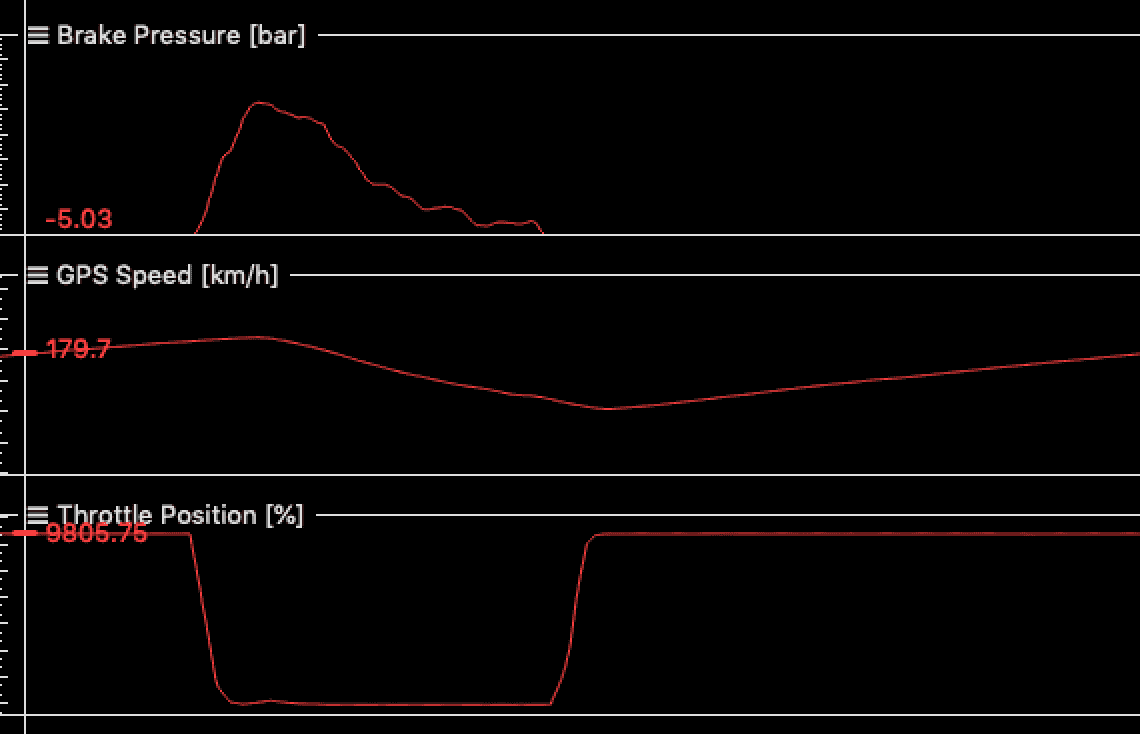 In this first braking zone there is no downshift and this graph looks picture perfect. Look at that immediate ramp up on brake pressure and a very nice release, this is what all brake zones should look like regardless is there is one downshift, multiple downshifts, or none.

Now, let’s see what the same drivers braking zone looks like when they are downshifting: 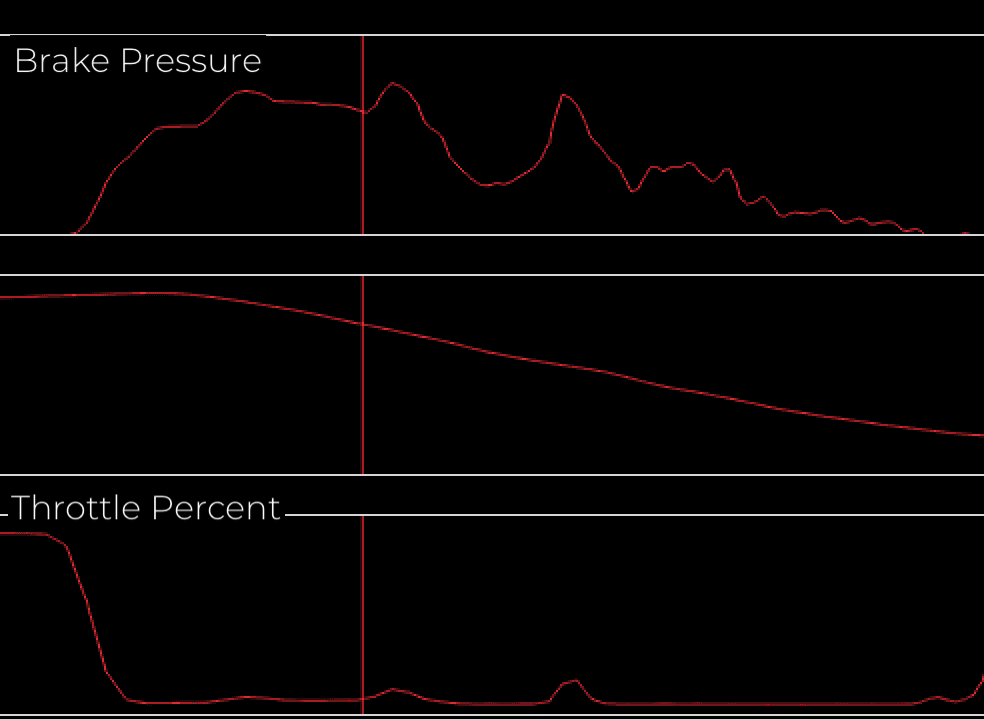 What makes this even more fascinating is that our driver here is a left foot braker. So, this is not the typical incorrect heel toe technique that leads a driver to release off of the brakes during those blips. The difference in these braking zones is purely mental!

Let’s go through the key areas they need to fix.

Our driver actually has perfect timing with their downshifts but they let other techniques suffer too much to have a good looking brake zone. Also, an additional note that should serve as a warning for all left foot brakers, if you look closely you can see our driver is ever so slightly resting their right foot on the throttle during the braking zone. That is very dangerous so if you are a left foot braker make sure you take the time to check your data to ensure you are not doing this yourself. Checking for that should be apart of your post-session downloads every time.

To make rev matching easier we also need to speak about where in the heel toe downshift the blip needs to come. Far too often we see drivers engage the clutch, blip the throttle as they are taking it out of the gear they were in and then going to the gear they want to downshift to and then release the clutch.

The first way drivers need to blip much more aggressively as the rpm’s don’t stay high for very long and that makes the whole technique much less consistent. When we delay our blip by that tiny amount we need much less throttle percent on the blip and the entire downshift becomes much more consistent.

Why Is Rev Matching So Important? Can’t I Just Slowly Release The Clutch?

It is impossible for a driver in a manual car to be at the limit of the car if they do not have a solid heel toe technique and are blipping the throttle to match the revs. The reason for this comes down to entry speed.

When a driver just slowly releases the clutch the rear tires will start to lock and they will need to kill off more speed to get into gear. A well-timed blip allows the driver to get the car into the gear they want at a higher speed. Since we want our downshifts to come before the turn in, that blip allows us to get the downshift done with more speed, turn in at more speed and trail brake all the way down to the apex.

When drivers do not blip they have to slow down more in a straight line and will have to turn in with less entry speed. The corner entry over slowing then often causes other very bad habits, one of those is causing a driver to pick up the throttle too early. Picking up the throttle too early is actually by far the most common error our coaches at Racers360 see, we have a great in-depth article on why it is such a problem here

So, to make rev matching easier we want you to focus on a few key points:

By focusing in on these three core areas it can give you something to focus in on, which really helps drivers learn. There is a lot going on in a heel toe downshift braking zone, so if we can limit all the noise and focus in on key areas we can make the entire technique feel a lot more simple.

Make sure you also check out our links in this article to the perfect heel toe technique where we go much more in-depth on that specific technique!